Being a fan of the Butterball bath bomb, I was eager to try the seasonal variation, Butterbear. At £1.95, it’s 70p cheaper than the Butterball, so I wondered just how effective it would be.

Moulded into an attractive polar bear shape, there’s a small amount of cocoa powder on the muzzle, and you can tell just how much butter is in the bear, by all the splotches of colour against the white. 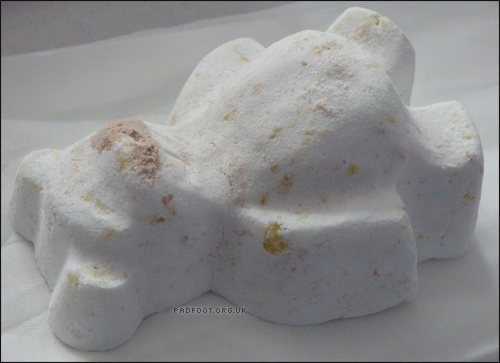 When Butterbear hits the water, it dissolves rapidly – mine was fully dissolved in less than 30 seconds! The water turns slightly cloudy, with the small pieces of cocoa butter floating on the surface until they eventually melt into the water.

It’s not a bath bomb you would buy for it’s appearance in the water (there’s no colours or popping candy), and the scent of cocoa butter, while not unpleasant, really wouldn’t scream “buy me” in the shop. Where this bath bomb does excel, however, is in the effect on your skin – the cocoa butter moisturises your skin really well. In fact, I would say that despite Butterbear and Butterball being the same size, Butterbear seems to moisturise my skin better – it felt suitably moisturised, without feeling that my clothes would get greasy from it.

Overall, it’s a fantastic product (especially being cheaper than the Butterball), and I think I’ll be buying a few to store up so I can use them through the year!