The first thing that struck me about Peeping Santa was the cute appearance of it – shaped like a bubbleroon, but with a Santa hat and eyes.I had high hopes for this little bubble bar. 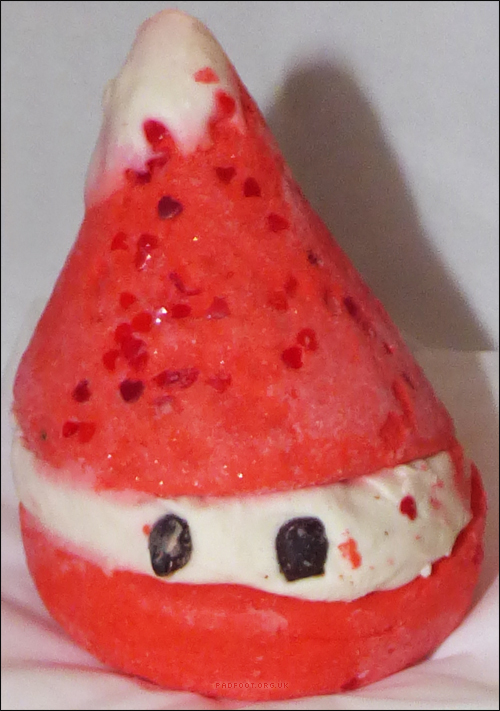 It’s not the easiest of bubble bars to break apart – rather than using the entire base in one go, I prefer to use smaller pieces to make it last longer, and that proved challenging to get a smallish piece to separate!

Even though I only used a small piece, there were plenty of bubbles – I have a feeling that if I’d used the entire base, the bubbles would have been flowing over the edge of the bathtub!

The creamy-coloured centre of the bubble bar is shea butter, which should be a nice way of hydrating my skin while taking a bath. However for me, the aroma of this particular bubble bar was a let down. Rather than being scented of orange (like Dashing Santa), or cinnamon and spices (like Holly Golightly), this particular bubble bar smells of strawberries. Yes, you read that right, this very obviously Christmas bubble bar, smells of that spring / summer fruit, strawberries.

I’m not too sure why Lush thought of strawberries for a Christmas product, but it’s not the first scent that comes to my mind for this time of year. So, it’s not a product I’ll be purchasing again, and I’ll be hoping that next year Lush might have a more wintry scent on a cute bubble bar instead!