Someone had mentioned on Twitter that a Red Kite had been spotted a few miles from here several days ago. I don’t know much about Kites, but the local Buzzards seems to have a wide ranging territory, so I’d hoped to take a walk in that general direction at some point, to see if I could spot the Kite.

As luck would have it, I didn’t have to go anywhere! Mum was in the garden and heard a commotion from the other birds nearby. Spotting a bird of prey circling, she shouted for me to come and look – by this point, the birds was still circling, but way too high to get a clear view with the naked eye. So, thankful that the rain had stopped, we stood in the garden with binoculars and a camera to watch, and I was able to get some surprisingly clear photos! 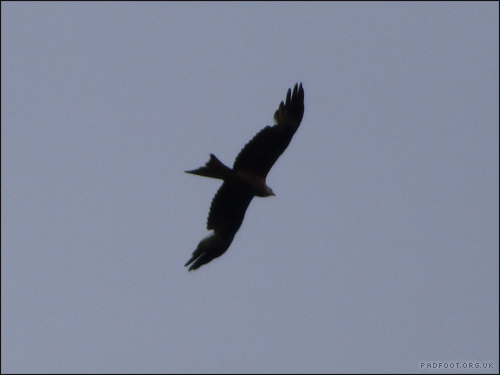 Unlike the Buzzard (below), the Kite has a forked tail – there are other differences, but that’s the main one I’m using to tell them apart. About 30 minutes after the Kite flew out of sight, the Buzzard was circling in a similar area, maybe trying to stake its claim on that hunting patch. 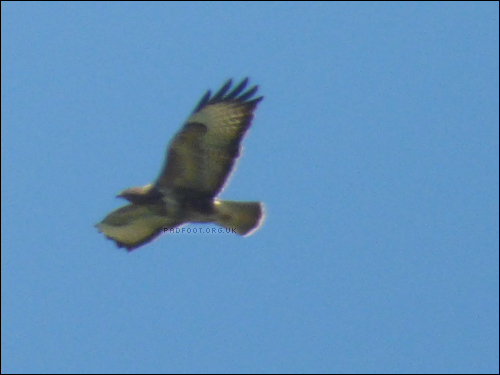 Until a few days ago, I’d not realised that a Red Kite could even be seen in this area (I thought they were mainly in Wales, where I’ve seen them on the Gigrin Farm webcam), and certainly never expected to be able to see one for myself from here!

The photos on this page are © Paddy (me) and are not to be used without permission.