Ok, so that’s a bit of a strange title for a blog post, but you’ll see what I mean when you get as far as the photos. The blackbirds have decided to take up residence in the garden – whether they’re sitting in the ornamental Quince tree, taking a bath, or eating yet more of the Berberis berries, there’s not many moments in the day when there isn’t at least one blackbird in the garden.

The bird bath is proving almost as popular as the berries right now, with one particular bird taking multiple baths in a day (that one has a slightly lighter patch of feathers on his back, so he’s easier to tell apart from the others). Today however, one of the other blackbirds decided it wanted to have a nice wash – the water had just been topped up, so there was plenty of opportunity to splash it all over. 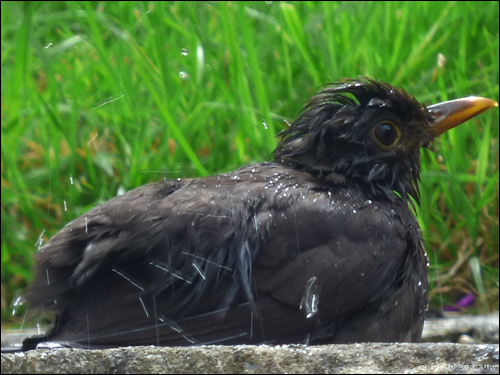 And there’s the punk rocker! I’ve seen birds taking a bath in the garden before, but haven’t ever seen them get quite so wet! Rather than flying into the relative safety of the Quince to dry off like the other birds do, this one decided that the lure of the berries was too great, and flew into the Berberis for a quick snack while it dried off!