Not the most inspired of days weather-wise today – the cloud is still there, but by 3pm the fog had started to clear a little on the hills. Not the best of days for birdwatching either, as the Army have been flying around the area, which tends to put most of the larger birds off.

One strange sight though, was a couple of gulls that looked like they were ‘mobbing’ the helicopter! I’m sure this was just an illusion given the angle and distance away from me, and that they weren’t as close as they appeared, but they did seem to circle the area where the helicopter was flying, and only flew off once the intruder had moved on. 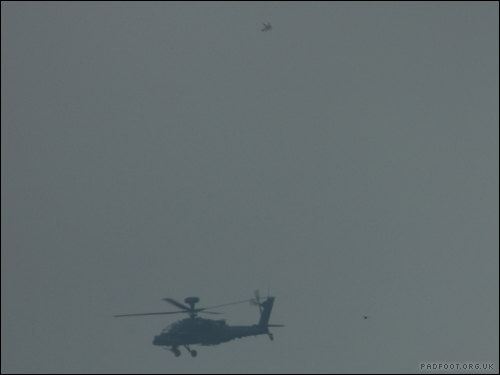 Can you spot the seagulls to the top and right, appearing to mob the Apache helicopter?