My skin can be terrible at times, the backs of my hands all red raw, then cracked split and bleeding. After an unfortunate experience with a recommended over-the-counter cream which made my skin feel like it was burning, I’ve been understandably wary of trying a new hand cream.

I spotted the Charity Pot on the counter in my local Lush store, and decided that I’d give it a try. If I didn’t get on with it, it’s only a 10g pot so it wouldn’t be a waste if I had to scrap it, and with the proceeds from the sale of the cream going to “good causes” I felt it was worth a try. 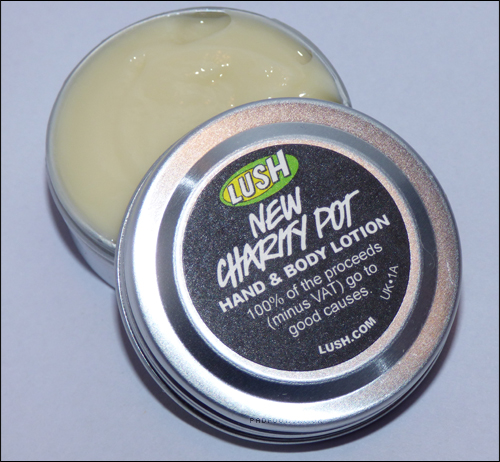 The cream is surprisingly thick so the tiny pot lasts ages, although trying to screw the lid back on with creamy hands is a little challenging! Lush products tend to make me think of overpowering scents, but the cream doesn’t seem overpowering at all. It’s certainly nicer than the chemically scents of some creams I’ve tried before!

Although it’s not currently my go-to cream for every day use (a review for that one will come later in the month), I would definitely recommend it. Even if you just were to get the small pot and put it in your bag for those days when your skin needs a little something while you’re out and about.